Down but not Out 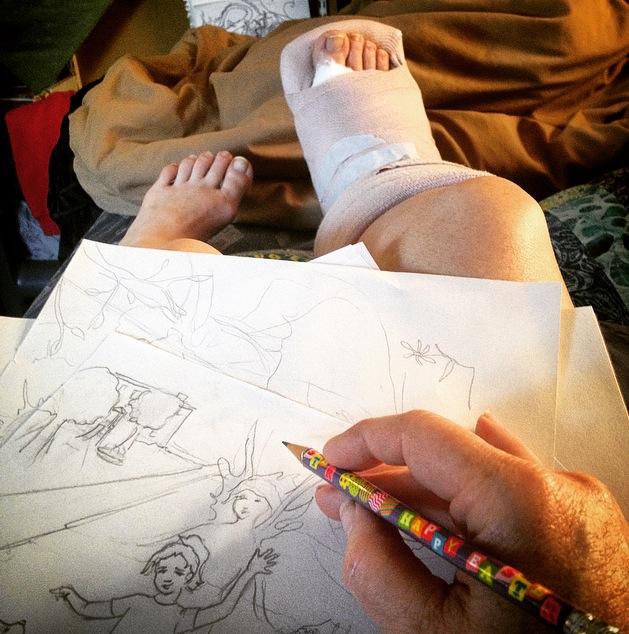 So last week I decided to take my 7yr.old son out for a “date night” with mom. We went to the school rollerskating party. Yup. ‘nuf said. So these mural projects I had all lined up are going to have to wait. I’ve instead been channeling my inner Frieda and have been making art from bed. I finished up some illustrations and photoshopped them into a storyboard/mock up of the book for my client. Thank the Goddess for technology, laptops and very helpful husbands. It felt good to accomplish something! Tomorrow I see the doctor about surgery. Gah. This is going to be a tough next couple of months. 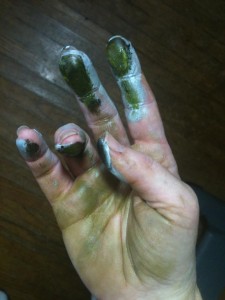 It has been so very long since I have felt the impetus to create. There have been far too many stressful situations occurring in my life for me to be able to feel that creative flow. I’ve been able to force myself to do what needs to be done, because, yanno, if I’m going to get paid for it, that can be motivating. But to be able to do MY thing has been a struggle. These past few days though I feel as if something has shifted. I have a long list of things to accomplish now. Some for me, some for others but my attitude surrounding them is different. And that is a good thing.

As a person who needs to create in order to stay somewhat sane, these past few years have been a real struggle. I do hope this change that seems to be happening is a long term one. It will be good to get my hands dirty again.

Life had been challenging of late. My latest challenge has been an unexpected trip to the Emergency Room with my husband. We are still here after a couple of days and will be for awhile more. While here I noticed a tiny cricket on the floor of the bathroom.

“Hello”. He didn’t respond at first, then “hello”. He said “remember your father in law used to fight crickets. He’s with your husband. Remember your Grandparents used to keep a ‘lucky cricket’ on their hearth. They are with you now. I’m your lucky cricket. I’m little and growing, like your luck. I’m still young, nourish me well so that I continue to grow. Nourish yourself too.”

Hello! An update from the green fairy.

This is an update by your wormwood queen webmistress – the site’s little helper fairy and Kate’s friend Beth. Right now Kate is with Ted who has been hospitalized for Meningitis. Thankfully it’s not the bacterial kind and he has been slowly showing some improvement with the medicine he’s on as his fever is slowly starting to come down. What they need right now is your prayers, good vibes, well wishes, or whatever manner of energy you believe in. I am in the process of installing a proper commenting system to the site so people can leave comments to Kate’s entries for just such a thing. (The WordPress comments function is kind of a hot mess for spammers.)

For those of you who know Kate and Ted there are other ways to offer them a little help. You know they work tirelessly from commission to commission, taught class to taught class and such to keep their wheels spinning. If you’d like to help them directly you can always give a new home to one of Kate’s wonderfully hand painted plates or tap her for a reading. You can find all of these avenues in her shop –Tea and Tasseomancy. Or help in keeping their current youth project going Good 4 Nuthin (which honestly has the best rewards entries right down to potato salad). Mostly, just letting Kate know you’re thinking of her and her family goes a long way. ;) 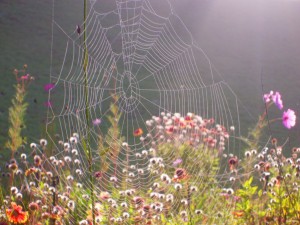 “The threads will hold you. They’re stronger than you think.” “Continue with your creativity and be ready to move quickly.” *laughing* “No, I won’t bite you, you already have superpowers within.”
Hello and Welcome! 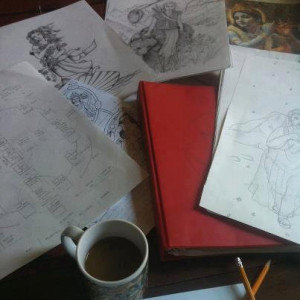 I just wanted to take this moment to say hello to my new visitors to my equally new site! With the help of my friend and webmistress Bethalynne, I’m getting all of my projects, art and aether-life (so to speak) collected together into one home. Eventually the contents of all of my work will be found here, neatly organized and ready to invite you to get to know me -the artist, the mother, the witch! Quite a bit of my work has already been added to the site but there is quite a bit more of it to add so please be patient as all of the sections slowly begin to fill out. In the meantime please feel free to reach out or follow me on Facebook, Twitter or Tumblr if you’d like to get to know me better. Or if you fancy a tea leaf reading or one of my hand painted pieces, you can always come see me at Tea and Tasseomancy -a place for art, tea and divination. So thank you again for your visit and please keep returning -there is much more to see and get to know!

I do murals, straight up painting, repair work and other creative type things to keep a money flow coming in but my goal is to one day simply do my art. I want to paint the stories that I feel passionate about. I want to be able to make a difference in this world through the art that I create.

My Goddess project that I have been working on is one of those passions. I don’t paint them because I expect to get rich, I paint them because I have to. There are times when I don’t get to work on them because I am busy with the survival things. It is easy for me to put myself, and my dreams, behind other things, the “practical” things. Then someone buys me some paint that I need, another sends me a check for new brushes and most recently, someone buys me some more boards so that I can start a new Goddess. (Not only does she buy me a board, she enlists the help of a friend who doesn’t even know me to deliver them to my home!)

I cannot even explain how this feels to me. To know that what I am doing is maybe something more than just MY dream. To know that perhaps it matters to others as well. It’s a validation that is huge for an artist like me. It keeps me motivated, it keeps me going. (It makes me feel less guilty for spending money on paint when I have a hundred other things I probably “should” be spending it on!)

To all my friends and to those I’ve never even met who have supported me in every way, I thank you. It’s huge.

Open your heart as Kuan Yin opens Her arms to embrace you. Listen to her wisdom that she shares, not with words but by Her example and through Her love. All is possible.

There are several stories about Kuan Yin. In one, she decides to become a nun as opposed to agreeing to an arranged marriage. Her father, after failing to dissuade her from this life, has her put to death. Because of her kindness she was made into a Goddess and began her journey to heaven. However she felt such compassion for those left on earth, she chose to remain until she could ease all suffering. In another story, it was a supernatural tiger that took Kuan Yin to one of the realms of hell after her father put her to death. However, instead of being tortured, she played music and flowers bloomed all around her thereby turning hell into a paradise. It is said that one way that she eased the suffering of poverty by giving the Oolong tea plant to a poor farmer in China. Because of this gift, his entire village was able to escape destitution.

Often in life we can feel, like Kuan Yin, as if we are caught in a type of hell. We find ourselves in hells of depression, fear, sadness, distress, or illness. Although everyone moves through these emotions during various times in our lives, our hell, our suffering, is created when we find ourselves stuck there, unable to leave. Kuan Yin teaches us compassion, not only for others but, most important, compassion for ourselves. She grants us mercy and allows us to forgive. What she shows us is that who we are and who we can become can change the world around us, simply by our being. She teaches us that as opposed to practicing compassion and mercy, we need to become them. When we release our hurt and become filled with love and compassion our perspective changes and our hell then changes to paradise. END_OF_DOCUMENT_TOKEN_TO_BE_REPLACED

There have been periods of time in my life when I will look in the mirror and not recognize the eyes staring back at me. It’s a strange experience. These are times when the inside of me has grown and there begins to be something different reflected on the outside and I wonder who I am? Today as I paint, I feel different. The brush feels different, the viscosity of the paint feels different. I feel like I have grown in spirit and technique. Taking a break from Santa Muerte was good. I had been feeling bad that I hadn’t achieved my personal goal of finishing her earlier. But I understand now that I hadn’t been ready. She wasn’t ready. Collectively I feel the endings coming fast and furiously. Santa Muerte is speaking loudly now. This painting will be different, it might not look it but I am different now and it’s time I begin to reflect that.

Time to End the Endings

My Sante Muerte is still not finished. While she has been up in my room, there have been many deaths. Literal and otherwise. For months now. In fact this entire past year has been one of incredible endings. Seemingly more so than usual. I’ve been to more funerals this past year than I have in my entire lifetime. I’m looking at her today and know that it’s time now to finish her. This week. I think there may be a few more endings. But it’s time to wrap that up! End the endings, get on with beginnings. I’m feeling quite strongly that Bridget is next. I will post pictures soon.