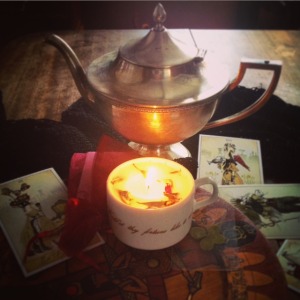 Last Sunday I hosted a wonderful Tea Party during a very nasty snow storm.  I was thrilled that I had so many brave guests join me.  We celebrated Imbolc, we made candles in tea cups, we broke out the drums and sang Native American songs, ate wonderful food and of course, drank tea. I never know what direction these parties may take but the conversations, the laughter and the sharing always fill my heart. Thank you to all who joined in the merriment!

Isidore Tarot Card of the Day: Six of Wands 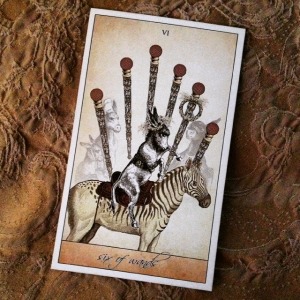 I spent most of last night lying awake. The gerbils in my head were spinning those wheels nonstop. Usually when I am up all night “thinking”, my thoughts tend to be non productive, sometimes nonsensical. Last night I was hit with true inspiration. I was able to reverse engineer some sticky details in order to form a larger conceptual picture. I was able to make some connections and understand some metaphors in a new light. I was actually anxious for morning so I could get started on some things. Until of course, morning came, now I’m seriously dragging! But that’s not my point…

After a night of breakthroughs I pulled a card for myself, the Six of Wands. First of all, who doesn’t love a picture of a donkey riding a zebra? I admit, I do have several favorites in this deck and this card is right up there. Not only for the image but for the meaning as well.

This card is about success and triumph. Sometimes public recognition. Well, I don’t know about THAT, but I do feel triumphant this morning. I think often our expectations or definition of success can be so large and overwhelming that we fail to recognize all the little successes along the way. Say you’re on a diet and you resisted that doughnut in the break room at work. That’s a success! Don’t wait until you’ve dropped the entire 20lbs before you allow yourself to feel triumphant. Recognize that moment.  I do something everyday to work toward my goal. Sometimes they are big things, sometimes they are little. But I discipline myself to do at least one thing, everyday. At the end of the day I sometimes have to remind myself that I should be proud of that accomplishment, sometimes I feel like I haven’t done enough. It’s an easy, self defeating  trap to fall into.  Changing our outlook to recognize the positive means we increase the positive in our life. One success leads to another and we continue, one foot in front of the other, until we reach our ultimate goal and triumphant success. This card says if we are not already there, we are certainly on our way. Keep going.

More about the Isidore Tarot.

Goddess Reading of the Day: The Sophia 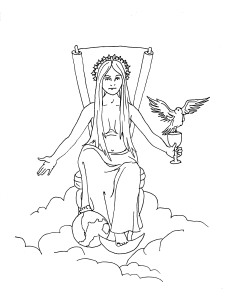 For my reading today, I pulled Sophia. My daughter’s name is Sophia. She’s been going through a tough time lately and has been on my mind. I guess this one’s for her!

Sophia is considered to be a goddess of wisdom in Hellenistic traditions. The name Sophia in Greek translates as wisdom. The wisdom Sophia gifts us takes place inside of ourselves. To work with Sophia means it is time to break through your illusions, your delusions and the lies you tell yourself.

This commitment is one that can result in pain as your ego falls away and your true self is revealed. The results are always worth it. The process is difficult.

Wisdom comes through experience. Don’t hold back. Do not choose to remain quiet because you fear humiliation if you speak. Do not choose to hide because you fear what people will think if you are seen. Things perceived as “bad” are lessons to be learned. They are opportunities for growth and change.  Humiliation brings humility. Humility is the understanding that not everything is about us. Wisdom comes with the realization that there is something more, something bigger than what it is we see and the understanding of our role within that.

The image is a page from my Goddess Coloring Book that features all the Goddesses of the Surcadian Oracle along with a description of their energy and history.

Card of the Day: The Lovers 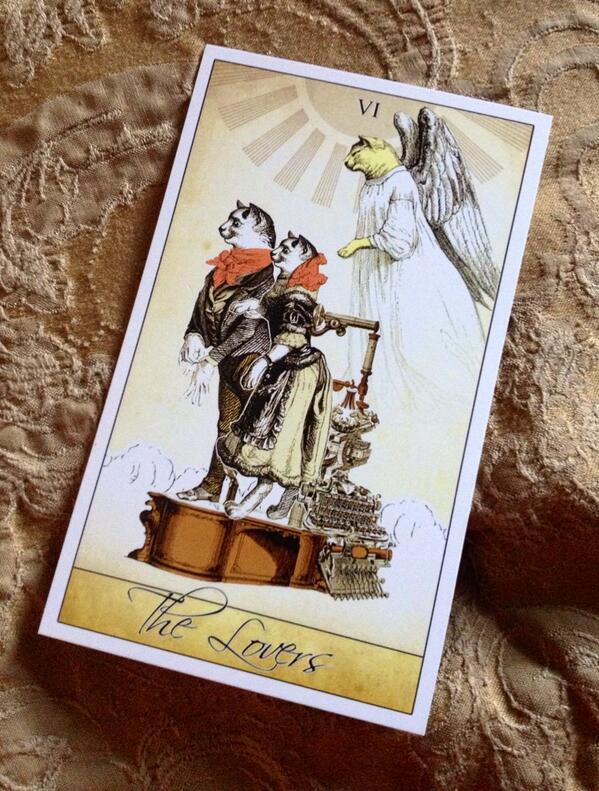 I just received the beautiful new Isidore Tarot Deck ( @TheIsidoreTarot ). After a long nerve wracking day I decided to pull a card for a quick reading. I pulled The Lovers…

Time to regroup and reconnect with the one you love. Life has been busy and hectic as of late. During these times it’s easy to get wrapped up in your personal dramas and forget to reach out to your partner in crime. Take time out to talk about your day, your concerns, fears and accomplishments. Make a plan of action and talk about how to work together to smooth out the rough spots in life. Don’t forget, you don’t have to do it all on your own. It’s okay to ask for help. Share the stress, then share the love!